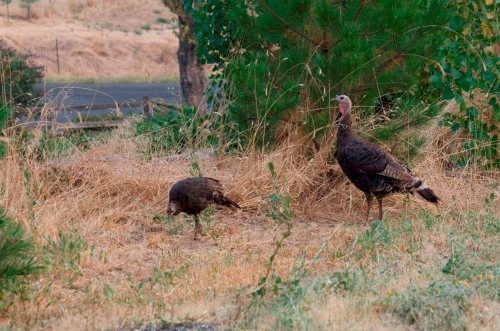 While having breakfast, we noticed these wild turkeys joining us as we watched them through our dining room window. It’s early for Thanksgiving, but not too early for wild turkeys making rounds. They come through our yard every year, and they are always welcome to enhance our scenery. My husband Vic dashed out with his SLR and took these photos.

Flocks of starlings flew by, and Effie’s gaze was transfixed. She simply watched them the whole time, without licking her lips or making any guttural sounds, or shifting to a pounce position. The distance between the window from which she is observing the flock to the trees where the starlings have perched is approximately 100 feet.

Effie and a too-close goldfinch encounter

Effie has never killed a bird, but her chasing of birds has resulted in a few avian injuries. She has injured them but backed off and let them recover and fly off. This morning was different. Looking out the window, I saw her tossing a tiny bird in the air, batting it, and catching it with her paws and her teeth. When the little creature hit the ground without getting up, I intervened.

Effie lay down on her haunches next to me while I examined the little bird, a tiny female goldfinch. Her eyes were closed, but she was breathing. One wing looked disjointed. She flexed her feet continuously, and I thought it could be rigor mortis.

The birds who have hit the ground of Effieland stunned have been ones who entered through the fence and eventually crashed into the outside of our house and simply landed there, stunned for a while. Effie always left them alone to recover, and eventually they regained the strength to return through the wire fencing and depart. Invariably these birds were mourning doves. They were large and strong and canny, and Effie only chased them when they were flying and her attempts to snag them were thwarted.

The goldfinch was very small, and I was furious to see Effie playing a catch-and-launch game with it. When the little bird hit the ground and didn’t get up, the game was over. I gave Effie to understand that I was her prey’s protector. She yowled to return to her garden, but I stood fast. She was grounded whether she understood the reason or not. She is napping peaceably in her chair.

I went out to the spot where the bird had been after about an hour, grim at the thought of Effie’s first bird kill. But the little finch was gone! She had left her spot and I could not find her anywhere in Effieland, though it would be almost impossible to see her among all the vegetation. In any case, Effie is not there for now, and no other predators can get in.

Thanks to God’s preserving grace, this tiny female goldfinch is a true survivor!

AFTERWORD: Confident that the little goldfinch escaped, I relented and let Effie out to resume her proper role as sovereign of Effieland. She played cat and bird too roughly, but the bird evidently survived and will likely select gentler play companions in the future. 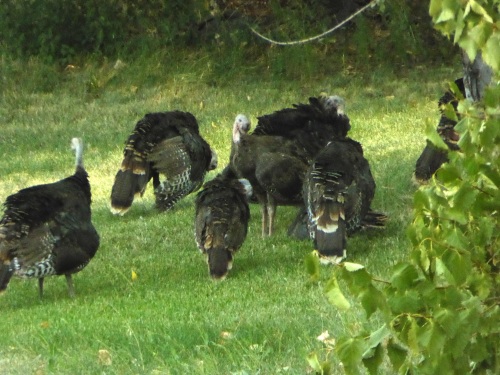 The sudden appearance of a flock of wild turkeys in my neighbor’s front yard was an entrancing photo op. I took the photo through a window. Now they’re in my front yard: 12 of them. . . 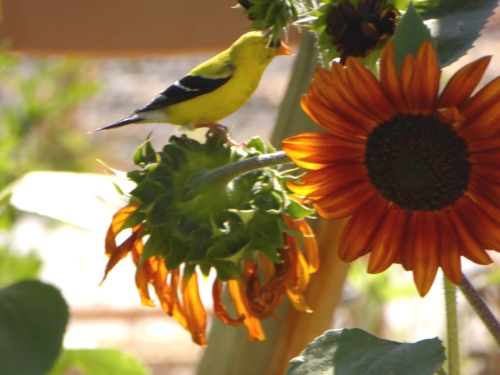 But of course! New friends every day!

Looking out the window, I noticed two goldfinches perched on our bronze sunflowers. My husband’s camera has more competent telephoto capability than mine, and he took these shots through a window without a flash. 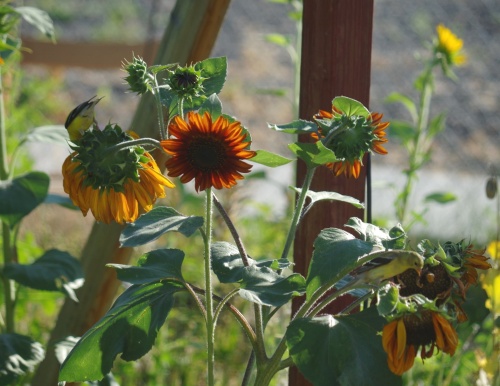 Today’s weather was brisk, but far more pleasant than the last few days of thunder, lightning, and rain. My husband and I celebrated with a Snake River fishing cruise in our bonny boat Pisca-Dory, and decided to visit Chief Timothy State Park.

The park has a boat ramp and there was no wait, and in fact, no one else there. There’s a $5 parking fee, and it was worth every cent for the peace and quiet and absence of anyone else on the entire portion of the river. A gaggle of pelicans was a very special sight. I think of all birds, pelicans are the most beautiful in flight.

We were out for crappie and bass, but also to enjoy being out on our boat on a pleasant day. My husband caught an 11″ Smallmouth bass who fought a good fight before he was brought on board. We both had two bites from fighters who bolted before we could land them in the boat.

Fishing has a lot of variables, and the fisherman doesn’t always win, but a fisherman loves fishing whether or not he secures a catch.

(Vic’s and my photos; Vic’s video)

My husband was playing César Franck’s Trois Chorals pour Grand Orgue last evening, as Effie listened attentively. Her movements engaged strikingly with the peaceable profundity of the music. She seems truly to enjoy classical music, and we are happy she is able to enjoy it with us in silent absorption. 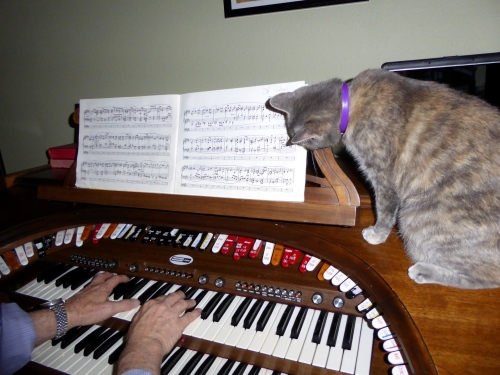 Ooooh! This music makes butterflies fly in my heart! 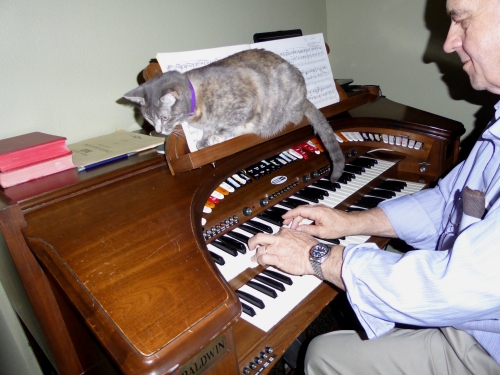 Let’s do this all the time, okay?

I just need those things his fingers are on to be a little higher.

I heard a “Thunk!” against the house this afternoon, and raced to the window overlooking Effieland to check on Effie. She was fine, looking neutrally at a mourning dove on its back. The pitiable bird, as many of its peers have done on every side of the house, had crashed into the side of the house next to Effieland, and hit the ground, landing on its back.

I was sure the dove was dead, and I was pleased Effie was not shredding and/or consuming the poor thing. . I did not want her to eat any bird, alive or dead, and become a bird killer. Initially she left this one alone.

I checked again several minutes later, and Effie was sniffing the bird. I went out and brought her into the house.

As I was wrapping up my task of vacuuming, I checked on the bird again through the window. It was still on its back, but now it was also raising and lowering its feet. I reckoned it was in death throes. I went out with a plastic bag to remove the dead bird and dispose of it so Effie would not attempt to eat it. Bad bird-killer habits come from eating birds dead or alive. But Effie had ignored a sparrow that crashed and died in Effieland not long ago.

I lifted the dove with my Nitrile-gloved hand to put its body in the bag. The dove immediately righted itself and hobbled, then walked; then it flapped and finally flew to the fence, landed on the ground, and walked through a normal wire fence hole.

I was elated; and I was more stunned than the dove had been, just moments earlier.  Effie was wide-eyed, but she did not chase the dove. I love my cat for that.

Effie, sunbeams, and a Downy woodpecker

I was happy to see a couple of Downy woodpeckers return to our Spirea garland tree this week, as winter continued to negotiate whether to settle in or depart. I tend to believe the migratory birds know better than the Weather Service; after all, the birds have more at stake.

Snow remains on the ground, but less of it. The lovely crystalline stuff gradually melts into the soil to awaken bulbs, grasses, and ubiquitous weeds.

Effie has less at stake than either birds or weather predictors. After frolicking in her sunny 40° Effieland, she comes inside for a ready-to-eat lunch, jumps into her hammock to give herself a thorough scrub-down, and then, unlike Hamlet, who could only feign an antic disposition, she undertakes a true antic routine. 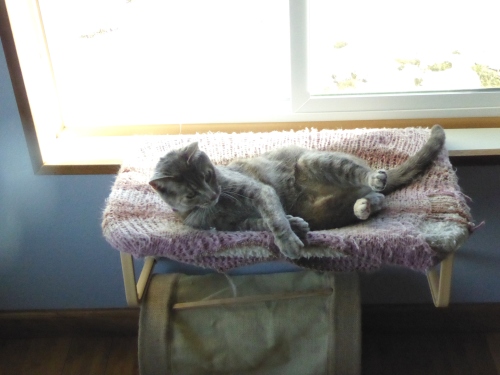 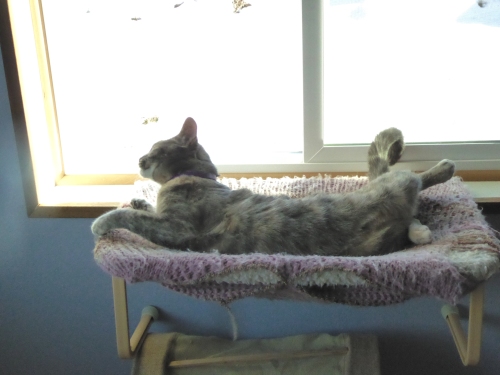 Our herd and a bird 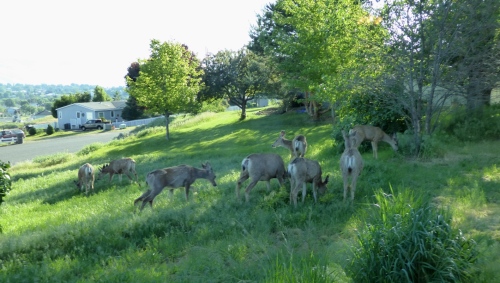 Eight deer showed up this morning to graze on the high grass and leaves on the trees.