I hope most of my readers recall with admiration and gratitude Mlle. Hermis Moutardier. Mlle. Moutardier, a senior flight attendant, led crew and passengers in disarming Richard Reid, aka the Shoe Bomber, on an American Airlines Paris-Miami flight in 2001.

I have admired Mlle. Moutardier for the past 16 years since the incident. The hapless, thankfully thwarted Reid is serving 10 consecutive life sentences plus 110 years (the rationale of Federal corrections formulas gets a little arcane for me).

I wrote a post in 2015 celebrating once again the admirable Mlle. Moutardier’s actions. Yesterday, Mlle. Moutardier herself submitted a comment to my two-year-old post! I was teary that she would thank me for honoring her; I felt she was honoring me, for which there was no reason at all. She was the hero; I was a mere reporter, years after the fact.

I have always thought of Hermis Moutardier as an inspiration. This is the crew member who led the capture of The Shoe Bomber! She poured a pitcher of ice water on his head and backup arrived from all over the plane. I believe one of the three captains in the cockpit even came out to help secure the inept Reid.

Hermis Moutardier’s comment is posted on my 2015 article at the above link. It is very brief. Her humility is stunning. I believe she must have simply been doing a search for her own name, as many people do, and come upon my blog. And wow! She thanked me for writing about her. How many people thank people they don’t know for anything?

Hermis Moutardier remains a heroine to me, as well as an example of humility. I am  grateful our paths have crossed  in space.

It seems sometimes that space is where real people are.

Hermis Moutardier
Image is from Time.com

Smoke is no exception to the rule that the sequel is always worse. Probably because of the wind direction, the smoke from a new batch of forest fires surrounds us. The smell is the worst yet. The basalt hills are not yet completely screened out, but this time we are surrounded on all sides. It’s thick. Effie of course wants to be out in Effieland. I picked some catnip sprigs for her to eat indoors. She was momentarily compensated but now wishes to be let out again. 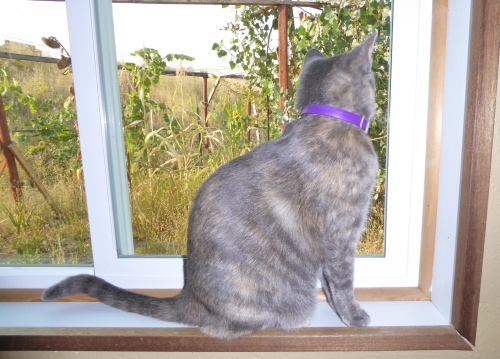 Effie looks longingly through the window at her beloved Effieland  and I try to combine consolation with my chores. She caught and ate a tiny bug, which brought her transitory happiness.

Grey as driftwood or cream as ivory–smoke is smoke

The forest fires generating the smoke I find so discommoding make me want to “lay my hand over my mouth,” as Job did (Job 40:4) when God had humbled Job’s contentious whining. Job’s misfortunes could hardly compete with God’s power and nurture.

The smoke has enveloped us for five days. Crews have been fighting the fires, but fires are difficult, and new ones keep springing up. They are in Montana, Canada, Oregon, Idaho, Washington–we’re surrounded, but how fortunate we are to be surrounded by smoke and not flames!

My heart goes out to The Beautiful City: Houston. I lived there for five years in the 1970s. I lost the car I had just made the final payment on. Water had subsumed my electrical system, an unhandy occurrence known as a “total.” The flood of 1976 took a lot of cars, but was a sprinkle compared to Hurricane Harvey.

Harvey has taken over 70 lives in Houston. Destroyed homes and cars have yet to be been tallied. Contaminated water is spreading diseases. Pets are being flown to San Diego for safe keeping. (I thought this was terrific!) If you have driven in Houston, traffic congestion now is probably right up there with Hong Kong.

The Alley Theatre where I saw some very good plays, is soaking rubble.

I have friends in Houston. They are some of the strongest, most resourceful people in the whole world.

If you have a heart for Houston, check out The Houston Chronicle.

I can hardly complain about the smoke surrounding my quiet prairie home. It’s nothing like Houston’s hurricane floodwaters. But, grey or cream, smoke is irritating and limiting, and the region currently has a “very unhealthy” smoke level rating. We can only pray and hope rain will come and the wind will change.

A small county murder’s nexus with a Puritan

My husband was  counsel to the defendant in a murder trial this week. The trial ran from Tuesday morning through today (Friday) around noon. The jury convicted the defendant of second-degree murder after deliberating an hour and a half. The slaying occurred a little more than two years ago.

Things evidently didn’t improve, so when friend victim walked in, friend defendant shot him.  The .45 caliber bullet took quite a tour through the victim’s chest, heart, aorta, and arm. A medical autopsy expert testified and showed grizzly slides showing a very great deal of blood. I attended only Thursday morning; my chief interest in the trial was hearing the expert’s testimony.

Sentencing negotiations are underway. The defendant told me yesterday that he looks forward to prison.

I was reading The Bruised Reed by Puritan Richard Sibbes (1577–1635) today, recovering from the rare occasion of sitting in on a trial, even just one day, for just a few hours. I was there because I like the defendant. He thanked me very graciously for a roll I served him at the jail’s Thanksgiving dinner last year. My husband and I were among several people who helped serve the dinner. It was my favorite Thanksgiving of all time. But Sibbes had something serious to say that seemed connected to friend defendant:

“All light that is not spiritual, because it lacks the strength of sanctifying grace, yields to every little temptation, especially when it is fitted and suited to personal inclinations.” (Richard Sibbes: The Bruised Reed)

“Personal inclinations.” They should probably be treated like flashing signs at railroad crossings. Ignore them at terrible, bloody peril.

Back on the River

We launched beautiful Pisca-Dory at 9:15 this morning. The weather was pleasantly cool, and the air was fresh. The sun shined through light cloud cover that was neither stormy nor smokey. The day was all-around pleasant and beautiful. My husband and I caught five fair-size bass between us; he caught three and I caught two. I caught two small feisty ones that I would have released had they not released themselves. Vic suddenly started catching little ones too–at least 13 of them! He released them all; a few jumped unassisted from the lures.

It was so good to be out in our dory fishing again! I hope the rest of the summer will be amenable to regular at-least-weekly fishing again. I hope the wildfires are over for the season ahead. Chinook salmon season opens next week, and I still aspire to catch some crappie!

I’ll post a video later on when Vic finishes editing it. I’ll make it a separate post so Followers of my blog will receive a notification when it’s up.

Tagged as Fishing, Weather, Wildfires in the Northwest

Yes! Rain is falling, and westerly winds are blowing! And we are going fishing!

More later. . .for now, we thank and praise our God who hears and loves and cares for His people.

I took this photo last summer, of Effie slavering over the unripe blackberries she had been checking out. This year she has shown no interest in them at all, even when they were ripe. I think she does really cute things with her tongue.

Her cute look elevated my morale after reading the NOAA wildfire reports and predictions. It was a tad demoralizing to learn that I am not cut out for life on earth, but hey, I’ve had a fair number of decades to prove I am blessed with some kind of knack for survival–aka God’s preserving grace.

I have a wonderful husband, a compatible cat, a pleasant home, and a well-matched church. Smoke happens. I’ve been outdoors only briefly, to run up the hill to get any eggs our hens have laid, and down the hill to pick up our mail. I feel a little cooped up, staying in the house so much, and very ready to get back to fishing in the Snake River again. The fires have kept us from fishing for three whole weeks.