Looking out the window, I noticed two goldfinches perched on our bronze sunflowers. My husband’s camera has more competent telephoto capability than mine, and he took these shots through a window without a flash. 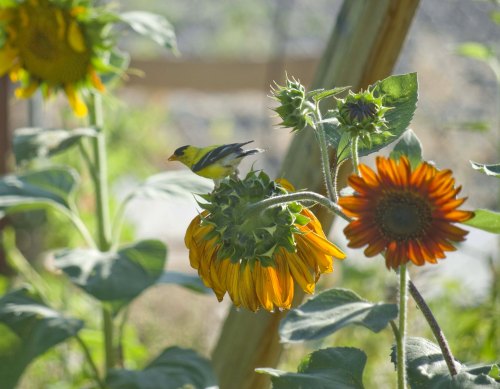 It was a warm and windy day. Effie was restless, and I had to take her out in wind gusting above 31 mph.

Suddenly, she bolted up the garden fence and looked like she was going to slip her halter and escape!

I caught her up in time, but she really wanted to leave the garden. We left through the gate and she surprised me by turning toward the field at an unusually brisk trot. I held on to her lead and jogged up with her. She stopped at the chicken trailer. Then I saw what she saw.

A dove had infiltrated the chickens’ coop; actually, they do this fairly often, but this time it particularly perturbed the hens. Effie glowered at the dove in a way that encouraged its departure.

Our tabby heroine remained on vigil a minute or so; then, assured she had saved the helpless hens, she led our jog back down the hill and safely home. A good time was had by all, etc.

Effie and the birds: a Hitchcock moment 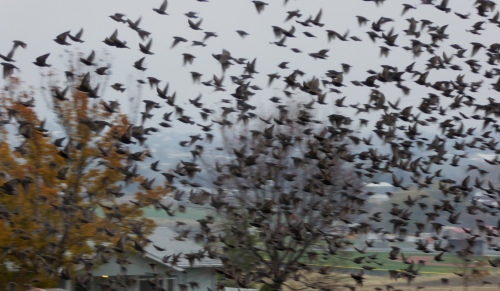 I can say that Effie was intrigued, teeth clicking, eyes fixed on the hundreds of targets. . .but the starlings took to the trees and Effie returned to batting and shredding her white mouse, carrying her prize around as if he were her kitten, and finally, taking a much needed break. 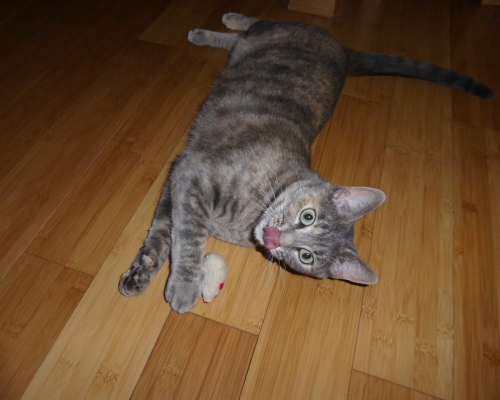 The cat’s definitely got her tongue.

Small, cute, fluffy little guy, out on his own this morning. . .I think he’s a juvenile Downy woodpecker, a good 50 feet beyond my window. 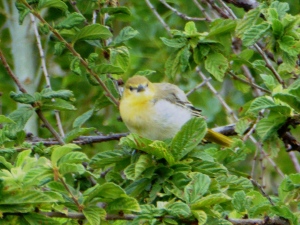 First, Mr. Bullock’s oriole arrived in full dress. His selection of the garland perch right in our line of sight was so well considered. My dutiful Lumix appropriated his handsome image through the window.

Then came Lady Yellowthroat, cheery and quizzical, looking in on us. 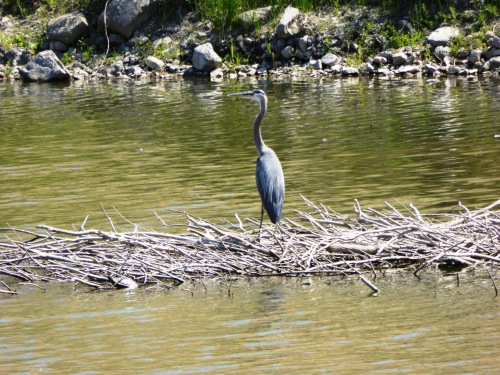 I went to the pond hoping to see a turtle sunning, but the heron presented a silent drama all his own.

And we have meadowlarks

Our pasture meadowlark chorale actually began last week. I could not imagine meadowlarks arriving so soon in sotto voce, so I thought I must be hearing Song sparrows–but it was too early for them as well. Finally, still not ready to trust the evidence of my senses–or my melodic memory–I found a You-Tube meadowlark song–that’s him all right. Our avian Jeduthun is back, and we are glad to hear him extolling God’s good creation, and the gratuitous beauty of it all.

I noticed the freckle-breasted fledgling robin standing on the rim of one of our barrel gardens around 11:30 this morning. He was chirping in what sounded like a happy way as he cooled his backside in the spray of a tiny sprinkler. I presumed he was a fledgling because he hadn’t yet grown his tail; he had only a stub where a tail would soon be, so I presumed he had not mastered flying quite yet. I watched him a while and took his picture through the kitchen window.

I had some tasks to do in other rooms, but I checked on the fledgling several times. He actually stayed for a couple of hours. At one point his mom showed up with a worm in her mouth, chirping greetings or instructions. The fledgling opened his mouth nearly flat-wide, emitting a universal, unequivocal exclamation of hunger. Mom chugged the worm down her little one’s throat, chirping something to him as she appeared to bob the worm into his throat in installments. It was a thrilling sight. Then Mom took off, not too far, and impaled a few worms for her own brunch.

When I returned to my kitchen window vantage somewhat later in the day, the scene had changed. The little robin was gone—he was mobile after all, and there were doubtless more watering holes to check out; but something chilling was happening. My neighbor’s cat Spot was chasing or escorting a fluffy grey cat away from the barrel garden.

I’ve never seen Spot take a kinetic interest in birds; he looks, but he doesn’t bother. He avails himself of our bushy lilac and spirea for his napping ground, and I’ve never known him to surrender his nap time for a mere bird. I’d never seen the grey cat on our property before. The extremely disheartening scenario I projected was the grey cat had snatched the fledgling, and Spot was either trying to get the bird away from him, or was running him off from his napping place. All I could see of the grey cat was his rear half, so I couldn’t know whether or not he was taking off with one lady robin’s heartbreak.

But around three, the fledgling appeared on my deck. Mom was on the ground below, beckoning him to come down for his afternoon worm. The little guy flutter-hopped down and flew close to the ground for a little way and caught up with her. Then she ran along the lawn and the little light of her life flutter-hopped a few flutter-hops behind her.

Sequel to yesterday’s mystery or: Things about pheasants we are probably better off not knowing

It was a male—the pheasant in the somewhat limiting bodily conformation typical of egg laying—was male. I knew pheasants were gender-dimorphic, but I probably forgot this obvious fact of nature because I haven’t seen a female pheasant around our place—though if I had, I’d probably have taken her for a partridge. I have two excellent field guides I could have readily checked, but I suppose I was too entranced with the strangeness of the sight of the mock egg laying—and for half an hour, no less. He was definitely not sand bathing. No wonder we’ve never seen a brood of pheasant chicks around here.

Our first visitation by chukars this year, and guess who sees them first…

Filed under Action & Being, Photo Galleries