I’m dreaming of a grey Christmas. . . 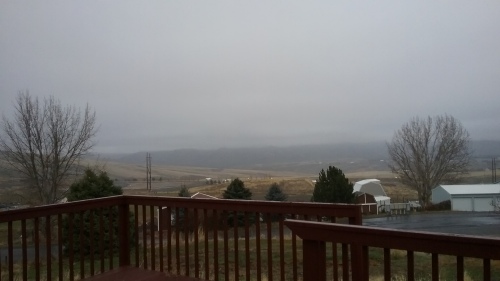 I’m dreaming of a grey Christmas. . .

A grey and cloudy vista can be morale boosting or demoralizing. Personally I have no real preference. I like clouds. I can’t imagine a bright sunny Christmas day in the northwestern prairie where I live. 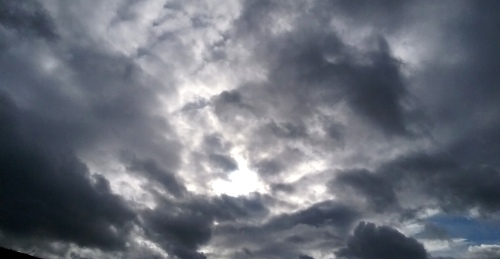 Sunshine returned in the north sky after a brief light rain, while to the south, clouds darkened as they surrounded the sun.

. . .garnished with sunshine and sky

After the Rain: The Movie

My husband Vic and I both were moved by the vibrancy of the clouds transiting Hells Canyon’s basalt hills after the rain. He set his video cam on a window sill and timed 30-second intervals for a little more than half an hour. I thought it was striking.

Effie’s own recipe for oral hygiene

While the sun nested in cloud scallopini. . .

Effie performed her conscientiously applied program of oral hygiene, in hope of eluding regular dental care. Her teeth are beautiful, her breath is sweet; grasses and thistles agree with her palate, and seem to be Nature’s Kitty Crest.

of snow and dust and randomness

The snow failed to secure its turf. The rain rinsed the lead-green hills and the buckskin grasses. Winter in the steppes banana belt is an intermittent thing.

I’ve caught its intermittency. I was dusting but my med alarm went off, and I gulped my two white things and one orange thing, which were in my purse, which was next to my lap-friendly computer, so I checked my email, and there was a bill, so I paid all the bills, and then wrote Heidi back to tell her I liked a poem she composed so well that I’d like to have coffee with it. But first I’ll finish at least the dusting, just to regain a sense of linear sequence to the day.

But just now, which is now just then, a long, white, thin-and-puffy cloud mass is advancing across the hills. I think it is coagulated mist from the river. So I snapped a picture of it through the window; otherwise I would have had the distractions of going outside, possibly locking myself out, as I have done before, etc. The picture I took showed the cloud as a narrow tube, but I forgot to save that one, so I took another a few minutes later, when the cloud was puffier and more ready to ally its awesome vaporous force with a formidable cloud front. I liked the other picture better, but it is tucked away in my great empty file of belayed aspirations. One of which is not going to be the dusting. . .

But dust is very good at waiting.

Ye fearful saints, fresh courage take,
The clouds ye so much dread
Are big with mercy, and shall break
In blessings on your head.
(– William Cowper)